Conversations for the Future of Europe: 1. The Future of Refugee Policy and Burden-Sharing in Europe 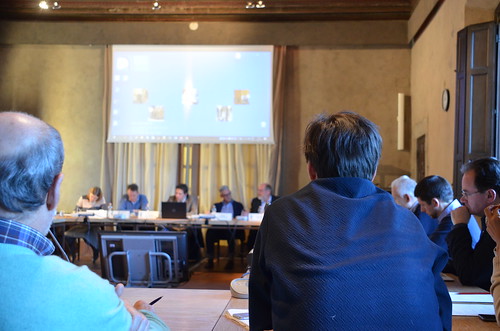 We launched our first Conversation on 15 January, 2019 at the Villa Schifanoia! It kicked off with two exciting contributions on the future of refugee policy and burden sharing in Europe. Matthias Lücke, Professor at Kiel Institute for the World Economy and eminent expert on refugee policy, in his talk stressed the complexity of the task that those aiming to improve refugee governance face and the resultant need for scholars to engage with actual policy makers – both within EU member States and in states from which migration occurs. In his view, significant improvements can only be realised if reforms occur in three policy areas. First, there needs to be enhanced cooperation with (especially African) states from which migration occurs. In order for policy makers in these states to contain illegal mass migration, Europe should offer improved legal migration opportunities. Second, within Europe, there is an obvious need for a centrally financed and managed asylum system. Third, policy should put less emphasis on the hotly debated topic of mandatory quotas and instead implement a system of ‘flexible solidarity.’

Eiko Thielemann, Associate Professor at the London School of Economics and Political Science, complemented this outlook by his contribution which built on his recent JCMS article on ‘Why Refugee Burden-Sharing Initiatives Fail’. He analysed the causes and consequences of the absence of a comprehensive European asylum regime to complement Schengen. In his proposal, he stressed the need to move beyond harmonization of national asylum regimes and instead focus on implementing common policies, financed by a common budget, as well as mandatory quotas. This, Thielemann suggested, is the only feasible way to move from (merely) symbolic solidarity towards substantive solidarity in asylum matters.

Discussant Andrew Geddes, Chair of Migration Policy and Director of the Migration Policy Centre, EUI, described a possible future of an EU without common asylum policies and raised some concerns about the feasibility of the speakers’ respective proposals. There ensued a lively discussions between panel members and the audience, touching on such issues as feasibility of EU migration reform, Europe’s role (both what it is and what it should be) in the global refugee and migration regime, and the interaction between elites and electorates when it comes to the acceptance of migrants and asylum seekers.

The next event of the series will take place on February 19 when the topic will be ‘Free Movement and Social Rights Conditionality.’ Conversations on the Future of Europe is organised by Mette Eilstrup-Sangiovanni and Andrea Sangiovanni and sponsored by the EUSOL project and the ‘Future of Social Europe’ project (Cambridge University).